I’m no pinball wizard. But I did help put the magic into a Willy Wonka & the Chocolate Factory pinball machine made by Jersey Jack Pinball, a company founded in 2011 that has already become an industry leader in the use of LCD screens, LED lighting and other technologies in the world-renowned, high-tech arcade games it manufacturers in an industrial park in Lakewood.

Jersey Jack is one of the 450 manufacturers, distributors, and other companies doing business at the 2,000-acre Lakewood Industrial Park, a commercial complex that includes 4 million square feet of industrial space, where the occupancy rate is so high that three new buildings with a total of 146,000 square feet of warehouse/industrial space are now under construction.

So when I was asked if I’d be interested in visiting the park, where 10,000 people quietly crank out everything from dental spurs to blitzes, I said that I just might be — especially since the news out of Lakewood these days tends to focus on growing pains of its Orthodox Jewish community or the public school system’s perennial budget woes. What would really interest me, I told Sudler’s public relations rep, would be to try my hand at some of the work his tenants do.

And not long after that, I found myself rolling up my sleeves and standing on the assembly line at Jersey Jack, and donning rubber gloves and a hair net at Trinity Seafood, which processes and distributes some of the porgy, bluefish and other commercial catch along the Jersey Shore, not to mention a share of the salmon, swordfish, lobster, clams, oysters and countless varieties of marine fare that’s reeled in around the world.

Jersey Jack was founded by industry veteran Guarnieri 36 years after he answered Heinz Magdalinski’s want ad for an electromechanical pinball repairman in Union. Guarnieri’s vision for his own creations was to advance the level of pinball machine technology, and his debut model, a Wizard of Oz-themed machine unveiled in 2013, was a hit with pinball’s first LCD monitor, not to mention a spinning farmhouse and glittery red shoes for flippers. The company now employs 60 people who manufacture what Guarnieri would only say were “thousands” of pinball machines a year. 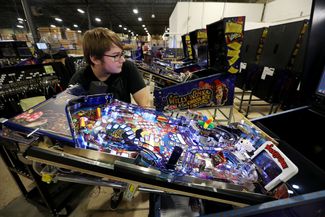 Jersey Jack machines range in price from $4,500 for a Star Wars basic model, to $12,500 for the Wonka special edition, which includes a plaque signed by its designer, Pat Lawlor, and the actors who played Charlie Buckett, Veruca Salt and other characters in the 1971 Gene Wilder film, adapted from Roald Dahl’s novel Charlie and the Chocolate Factory.

The Wonka model is Jersey Jack’s fifth and latest creation, having debuted this past summer, when the game blog Roarbots.com called it “A world of pure imagination,” and the Silverball Museum Arcade in Asbury Park assured visitors to its home page, “We’ve got your golden ticket!” I worked briefly on one new machine under the watchful eye of Jersey Jack veteran assembly worker Dave Johnson, 47, of Long Branch, former custodian.

“It’s awesome,” Johnson said of his job. “When I build these things, I want the customer to be able to enjoy the game. That’s the main thing.”

I stood with Johnson on an assembly line for the “play field,” or main surface of the game, a wooden board with a computer-guided paint job and pre-cuts for component inserts. The play field progressed through a series of assembly stations, where the components are fixed to the board with screws by one of the assembly plant’s 60 employees, all in accordance with instructions laid out on a sample play field with its components already in place, like a template, that hangs over the assembly station. There are more than 3,000 pieces to each machine. 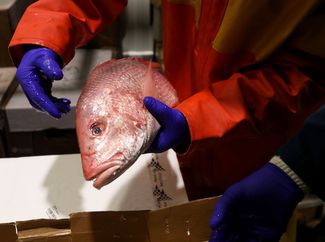 To give me a first-hand taste of the process, Johnson had me install a pair of so-called pop bumper leaf switches, which control the response of the bumpers — the mushroom-like elements that light up, make sounds, and snap back at the heavy silver balls that strike them.

I picked two of the metal switches out of a bin,…