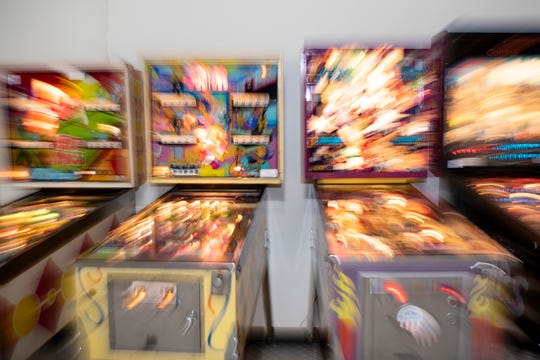 Terry Groves stood with his eyes fixed on the metal ball as it careened off bumpers and flippers, his face illuminated by the brightly-lit backglass. Classic arcade sounds reverberated from the machine.

Groves, a Battle Creek native and one of the top pinball players in the world, had a ball in play during a game of “High-Speed,” a law enforcement-themed pinball machine located in McCamly Place, the 23,000-square-foot commercial space that conjoins Kellogg Arena with McCamly Plaza Hotel.

It is one of 16 pinball machines at the Playable Pinball Museum, opened by Groves and his wife, Jane, in October.

“I just wanted to bring these out, instead of putting them in a barn at my place, only being played when friends come over,” Groves said. “This way everybody can play them here.” 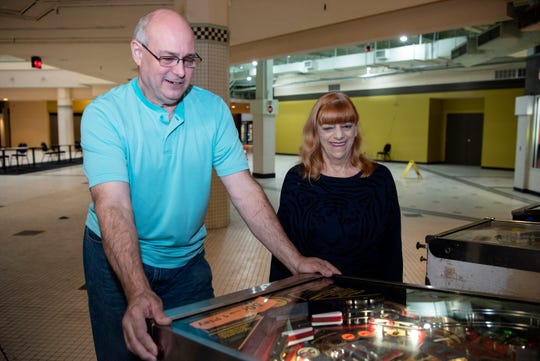 The Playable Pinball Museum is open 24 hours a day to guests of McCamly Plaza Hotel, and open to the public daily from 8 a.m. until 11 p.m. Most of the games simply cost a quarter, although some of the newer machines cost as much as 75 cents.

Groves said his classic pinball arcade is not technically a museum. But with several antique machines, including a “nudgy” dating back to 1947, they are sure to elicit nostalgia in players.

Jeffery Beck of Battle Creek stumbled upon the collection earlier this month and has become something of a regular, recording all his high scores in a journal.

“I just walked in the door one day and I checked it out, wham, all these pinball machines. I’m going to play,” Beck said. “So I got some quarters. I’ve been spending a lot of money playing these machines every day. Terry is a busy guy, and he’s working hard.”

Groves has an office on site where he repairs and restores pinball machines and is available to fix any problems players may have. He says all the money collected is reinvested in buying, repairing and reconditioning more machines.

“This is his dream,” Jane said. “I met him back in ’79, and one of the first things I learned about him was that he loves pinball. We’ve spent a lot of time, like at a bowling alley, playing pinball. It was a daily thing.”

Originally a hobby, pinball became a greater passion for Groves after he found a tournament that was being held in Kalamazoo about eight years ago.

That rekindled his dedication to playing the games. He is now ranked 1,186 out of 40,085 pinball players around the world, according to the World Pinball Player Rankings.

That Kalamazoo tournament also rekindled his interest in collecting and restoring old pinball machines. A retiree from Post Consumer Brands, where he did electro-mechanical work, Groves first began repairing them and flipping pinball machines about 20 years ago.

But some pinball machines were too good to let go, so his personal collection grew and now sits at 38.

The Playable Pinball Museum had a soft opening. Not all of the 16 machines are playable yet. But he eventually hopes to have his entire roster of games on site and plans to host tournaments and events in the coming year.

“With the hotel, there’s no other place in the United States that has anything like this,” Groves said. “Stay at a hotel and have a 24-hour pinball museum to play. I’m hoping this will become a destination.”

Nick Buckley can be reached at nbuckley@battlecreekenquirer.com or 269-966-0652. Follow him on Twitter:@NickJBuckley.